ECCP Committees serve as launching pads for initiating discussions and deriving common positions on issues that affect enterprises and ECCP Members. As part of your ECCP Membership benefits, you are entitled to participate in the various committees of the chamber and contribute your voice to important industry issues and discussions. These discussions help shape our advocacy efforts and allow us to lobby for and support your business interests.

The Philippines is in a good position to offer numerous opportunities to agriculture-oriented investors, thanks to its strategic location, favourable climatic conditions and available resources for agriculture.

About 12 million Filipinos work in the agricultural sector. If the country can significantly increase its exports and imports of agricultural goods, agricultural provinces would generate much greater revenue, provide more employment opportunities, and lessen poverty in rural areas. This is especially important for Mindanao, the country’s breadbasket that has great underdeveloped potential for agricultural exports.

In terms of employment generation, in 2013 the automotive manufacturing sector generated an estimated 68,000 direct jobs. 8,000 of those were in vehicle manufacturing, while 60,000 were in parts manufacturing.86

A young demographic, rising middle class and low ownership of cars are the driving forces for continued growth of the sector.

The development of the consumer goods and retail sector is a product and also a driving force of the continued economic growth in the country. In fact, one of the key components driving economic growth in the past years has been private consumption. Similarly, from the production side, retail trading was a key contributor to GDP growth. As a whole, it is estimated that the retail sector accounted for 14% of national GDP, equal to approximately 1.6 trillion PhP in 2013.

There is a boom in the retail sector, which is reflected in the fast growth of shopping malls across the Philippines and especially in the NCR. However, mainly due to a restrictive legislative framework for international investment in the sector, most major international companies have no choice but to enter the country through franchise agreements or partnership with local retail companies; up to now there has been only one exception of a European company entering the Philippines independently in 2014. Effectively, the industry is largely dominated by few large players.

In addition to the priorities highlighted below, IPR enforcement is a major area of interest for European businesses active in the Philippine retail sector. Therefore, the Committee endorses the recommendations made in the cross-sector paper on Intellectual Property Rights.

The Philippines has been recognized as having one of the highest electricity prices in the Asia Paci c region. 68,44% of the total sales (43 351 GWh) were contributed by the private sector utilities, while the remaining 24,22% (15 340 GWh) were from electric cooperatives.

As one of the rapidly growing economies in Asia, the Philippines faces various environmental challenges. The country’s significant natural resources are seriously degraded due to poor management. Water and air pollution levels continue to worsen. Greenhouse gas emissions are rising due to activities from the transport and power sectors. The country is also considered as one of the world’s most vulnerable to the impacts of climate change and natural disasters.

For the Philippines to pursue a path of sustainable development, the country must become more environmentally resilient as natural resources play an important role in the Philippines’ economy.

The Philippine economy sustained its growth momentum having experienced a 6.3% increase in the 4th quarter of 2015, leading to a 5.8% year-on-year growth. Banks lead the sector with over 80% of the total industry assets and serve as a main source of credit in the economy making them the driving force in strengthening the country’s financial system.

The Philippine banking system has recorded sustained growth in assets and deposits, while the country’s balance of payments (BOP) produced a surplus of €726 million in the 4th quarter which is higher than the previous year.

By the 4th quarter of 2015, the total number of banks’ head offices slightly declined from 652 to 635 as a result of consolidation that encouraged the entry of bigger foreign players and caused the exit of weaker or smaller players.

Growth in loans, financial assets, and equity investments increased the resources of the banking system by 7,4% to €239,4 billion as of December 2015, while the insurance industry generated over €3,32 billion in total premium income, up 29,7% from €2,56 billion in the same period a year ago.

The insurance industry’s income from life and non-life premiums generated about €4,5 billion last year. This strong growth is expected to be sustained as regulators forecast premium income to expand by 28% to €5,78 billion in 2016. There are at least 26 life and 71 non-life insurance companies in the Philippine insurance industry.

The Philippines has fast growing Food and Beverage Industry, with the restaurant sector growing at the average of 7% in the last 5 years. The total revenue for the food service and restaurant industry was EUR 7.2 billion in 2014 and 10.1% of all registered businesses in the Philippines are under Accommodation and Food Service Industry. Its growing middle class results to bigger demand for wider range of good food and high quality products.

The past years have seen a renewed focus on healthcare in the Philippines in an effort to provide a more inclusive national healthcare system.

Market trends also show an increased focus on healthcare; in fact, in 2013 the Philippine pharmaceutical market generated over 127.34 billion PhP in revenues, making it the third largest market in the ASEAN region. This reflects an increased spending per capita, which was estimated at 4,201.37 PhP per year in 2011, up from just 1478.79 PhP in 2001.163 The ethical pharmaceuticals market also enjoyed a 6% annual growth rate in 2013, the highest rate in five years.164 Similarly, generic medicines are becoming more popular among Filipino patients as perceptions on them begin to change.

While foreign pharmaceutical companies captured approximately 62% of the revenue share in the Philippines in 2011,166 manufacturing pharmaceuticals products, including those for foreign companies, is dominated by one domestic manufacturer.

Human capital is one of the main assets of the Philippines and its economy. With a population of approximately 100 million, of which 52.7% are under the age of 25, and a median age of 23.5 years, the country offers a large pool of young talent.

The main competitive advantage of the Philippine workforce as compared to other countries in the region is the widespread proficiency in English. This is reflected in the rapid development of the BPM sector; in fact, in 2014 the IT-BPM sector reached over 1,000,000 employees nationwide.

However, competitiveness of the Filipino workforce is not limited to language skills; European investors have also highlighted cultural adaptability, customer service mindset, and good work ethic as some of the main factors which guide their preference for Filipino employees.

In addition to human capital attracting foreign investors to the Philippines, it is also one of the most significant exports. Remittances by OFWs are one of the contributing factors to high economic growth in the past years and accounted for over 843.51 billion PhP in 2014 alone.

A commendable reform in the past years is the introduction of K-12 system to basic education in the Philippines as a result of which, since 2012 the Philippines has a 12-year education system in line with most countries in the region.

In addition to traditional tertiary education, there is a push towards TVET systems, such as the Dual Training System led by TESDA.119 The expected passing of the amended Apprenticeship Bill is expected to provide a substantial boost to this type of education.

Industry revenue grew to 679.14 billion PhP in 2013, up from 164.21 billion PhP in 2006. Strong growth is expected to continue; according to IBPAP estimates, revenues will grow to 25 billion USD, equivalent to 10% of the global market, by 2016.124 According to a recent estimate by Tholons consulting company, the Philippine IT-BPM sector has the potential to grow to 48 billion USD by 2020, accounting for 20% of the current global market.

The government has identified the IT-BPM industry as one of the key industries in the Philippines. This has resulted in steady growth and a favorable environment for companies in the sector. One of the most important agencies for the industry has been the Philippine Economic Zone Authority, which has attracted most of the foreign investments.

The ECCP continuously works with local government units to further improve the business environment from the grassroots level. By working with LGUs, especially through Project I4J, the ECCP is making great strides in ensuring a safe, productive, and level playing field for both European and Philippine busineses alike.

With an economy largely driven by the services sector, the Philippines’ major sources of growth have become more diversified in recent years. The expansion of manufacturing activities is a clear manifestation of this structural change as it outpaced the growth of the country’s services sector within the last four years.

While service-related economic activities have traditionally buoyed the Philippine economy during the past decades, the economic contribution of the manufacturing industry has become more notable since 2013. From 1999 to 2012, services registered an average quarterly growth of 5,5%, while manufacturing grew at an average of 4%. However, from 2013 to 2016, the average quarterly growth of the sector hovered around 8,1%, while services registered an average of 6,6%.

From 2010 to 2015, the manufacturing sector contributed €14,2 billion in gross value added (GVA) reaching €52,1 billion GVA at current prices and growing an average of 7,3% per annum, nearly double the annual growth rate of the previous decade. More importantly, manufacturing labor productivity gained a huge 30% increase (based on GVA current prices) from 2010 to 2014 after plateauing in previous decades.

Foreign direct investments (FDIs) in manufacturing, excluding reinvestments and debt instruments reached €2,8 billion in the last five years. In 2015, approved FDIs reached €2,6 billion. The availability of natural resources such as copper, gold, and nickel has lured foreign companies in mining and metals processing, representing 20% of manufacturing-related FDIs from 2009 to 2013.

Estimated to have expanded by 7–8% to €25,1 billion in 2015, the Philippine semiconductor and electronics industry also accounts for the majority of the country’s exports, led by large foreign investors such as Amkor, Canon, Samsung, Sunpower, and Texas Instruments, among others. Companies have also invested in unprocessed and processed tobacco, given the country’s strong agricultural base.

The geographic structure and strategic location of the Philippines are among the main factors for it to be recognized as the ship construction and repair hub of Asia. As the second largest archipelago in the world, the Philippines is fit for establishing bases for shipbuilding. With excellent management and skilled human resource matched with capital, technology and global market opportunities, the Philippines can be one of the largest shipbuilding nation in the world in the next five to ten years.

The Philippines’ tourism industry is regarded as an important contributor to the generation of foreign exchange earnings, investments, revenue, employment, and overall output growth. The inclusion of tourism as a major pillar in the Medium Term Philippine Development Plan (MTPDP) has given priority to the tourism sector by promoting the Philippines as a premier tourist destination and investment site.

Its 7,107 islands including beaches, coral reefs, and mountains, are an asset which can be developed exponentially to increase the share of the growing tourism arrivals to Southeast Asia for the Philippines.

In 2015, the Philippines generated international tourism revenue earnings amounting to €4,39 billion, which is 5,92% higher than the previous earnings in 2014. The industry marked another milestone as visitor arrivals surpassed five million arrivals, as the country welcomed more than 5,36 million visitors in 2015.

The EU ranks the fourth largest regional source of tourists to the Philippines; it overtook China in 2014 with a record number of 400 000 tourists.

The ECCP’s Women in Business Committee aims to serve as a platform for promoting awareness on women’s rights in the workplace and seeks to improve working conditions for women in all sectors and levels of employment.

The YPC offers emerging business leaders a platform to make a difference in both the local and international business environment by means of innovative strategies, ideas, advocacies and events specifically designed for the development of young professionals and entrepreneurs in the Philippines. Visit http://www.ypc.ph for more information. 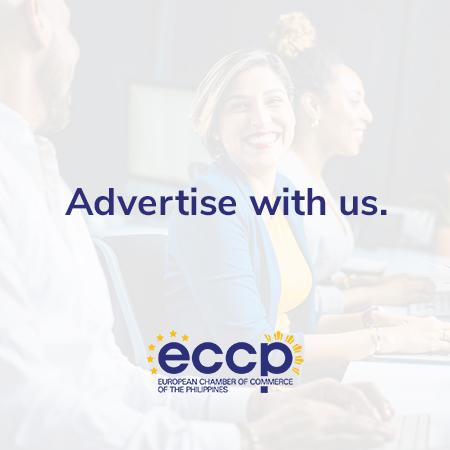 ‘Have a heart,’ BIR told